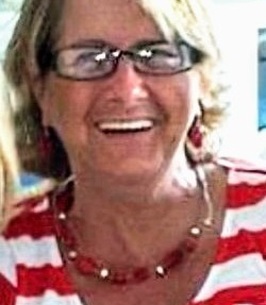 Alva M. Herman, 65, of Bellmeade, passed away Sunday evening at Maybrook Hills Center, from complications due to ALS Disease.

Alva was born in Tyrone on July 4th, 1956, the daughter of Elwood and Anna (Soellner) Carson. Both parents, a brother Ralph, and a sister Mary, preceded Alva in passing. Surviving are a sister, Nancy Hunter, and a brother, Paul Carson.

Alva is also survived by her Significant Other, Leo Walter at home, a son Lucas Hoover and significant other Ashley Campbell, a daughter, Miranda Hoover, and her grandchildren Kylin, Leena, and Harper. A special niece, Leslie Kensinger, along with 2 special friends, Annette Quintili and Chris Schezzini, were a big part of Alva’s life.

Alva worked as a server in several restaurants in both Tyrone and Altoona, including LaScalia’s and Jethro’s. She retired from Martin’s/ Giant in July 2021.

Alva loved baking, making candy and jewelry, decorating the home, and the beach. Most of all, helping family and friend made her the happiest.

The family and friends would like to thank the staffs at both Maybrook Hills and Grane Hospice. Also, to the Pittsburgh and Philadelphia ALS Chapters along with the staff at the Hershey ALS Clinic for helping our dear Alva through her difficult travel through ALS.

A memorial service has been scheduled at the Calvary Mausoleum Chapel, Altoona on Monday, June 20th @ 11:00 a.m.

In lieu of flowers, please make a donation to the ALS Association, in Alva’s memory.