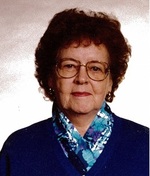 Jane Rollin, 92, of Clearfield died on Monday, April 1, 2019 at the Colonial Courtyard, Clearfield.

She was born on January 15, 1927 in Clearfield, a daughter of the late Clyde and Dorothy (Parks) Curry.

Ms. Rollin was employed by Airplane Marine and Sylvania Corp. She later became a homemaker and enjoyed caring for her family.

She was a member of West Side United Methodist Church and Eastern Star.

In addition to her parents, she was preceded in death by her husband, Jess E. Rollin whom she wed October 22, 1949 in Clearfield. She was also preceded in death by six brothers, Orvis Curry, Melvin Currry, Eugene Curry, Edward Curry, Jay Curry, and Robert Curry; and three sisters, Norma Stroupe, Nancy Conklin, and Janet Augustine.

As per Ms. Rollin's request, there will be no public viewing or services.

Interment will be held at a later date in the Hillcrest Cemetery, Clearfield.

The family suggests that memorial contributions be made to Clearfield County SPCA, 275 21st St, Clearfield, PA 16830..

PA Simple Cremation, Clearfield, is assisting the family with arrangements.