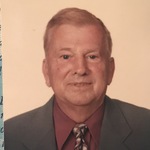 Larry worked hard all his life and provided well for his wife and five children. He had a variety of jobs, starting out trimming trees, working for Kane Roofing, and even a steeplejack; but his longest job was as a salesman for the Canada Dry Co. for 15 years and the Here’s Howe Company for 14 years, where he was affectionately known as the “Candy man.”

Larry will be remembered for his friendly disposition, his quick wit, and that smile with a twinkle in his eye, as he loved to make people laugh. He did love people and went out of his way to be friendly, hospitable, and kind to others. The most important thing in his life though was his relationship with his God Jehovah. He was baptized as one of Jehovah’s Witnesses in 1963 and served as an elder in the local Kane congregation. His love for people caused him to want to share the good news of God‘s Kingdom with everyone he met. He set an excellent example for his family by being content and happy with the simple things in life, while putting spiritual things first.

Larry married Joyce Ann McCullough on February 8, 1953. They enjoyed almost 68 years of marriage. Larry was a very devoted and loyal husband. It was a thing of beauty to watch them dance together on the dance floor. They really enjoyed life to the full as a couple. One of the highlights of their life was traveling to various places around the world and spending time with their brothers and sisters of like faith in other countries.
Larry was a good father and grandfather to his five children, seven grandchildren and three great -grand children, whom he was so proud of. Although he will be missed by his family and friends, they look forward to being with him again and seeing him in perfect health in God‘s promised new world.

Larry is survived by his wife, Joyce Ann (McCullough) Nortum and four children, Brenda Joyce McKibbin and her husband Dean of Cranberry ,PA;Cindy Lynn Harrington and her husband David of Butler PA, David Alan Nortum and his wife Terri of Russelton, PA; and Sandra Joan Smitsky and her husband Daniel of Fenelton, PA; one sister Joyce Cherry and her husband Joe of Johnsonburg, PA; two brothers: Jack and Shirley Nortum of Wesleyville ,PA; and Gene Nortum.
He was preceded in death by his son Randy Lawrence Nortum, a brother Robert Nortum, and his parents.

A zoom memorial service will be held on January 2, 2021 at 1 PM. Those wishing to make a memorial contribution may do so by contributing to the worldwide work of Jehovah’s Witnesses on www.jw.org.