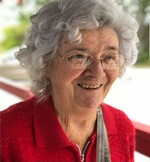 She was born before cell phones and the Internet. She survived the Great Depression, World War II, 9/11 and a pandemic. She spent her entire life in service to those she loved. As the oldest child she helped to care for her siblings Mary, Clair and Pat and then her children, grandchildren, and great-grandchildren.

She had secret recipes for carrots, nut roll, and noodles. She was tough, funny, and stubborn. She lived in the moment the way so few of us do.

Marge was born April 29, 1924 in Pittsburgh to Clair and Clare (Greenland) Hartle. She grew up in Drifting, PA, in a modest home lacking electricity or indoor plumbing in the throes of the Great Depression. During WW2 Marge moved to Harrisburg and volunteered at the USO to do her part. Not long after the war ended, she married Fred Spanogle. Their first born was Fred (Smoke), next came Jeff and then the youngest of their family, Leesa.

Marge and Fred moved to Eustis, Florida with their family in the 60’s and Marge lived there and in Apopka for most of her life, with several stints back in Pennsylvania including her final year. She ran her own successful real-estate business in Eustis for over 30 years.

The greatest joys of her life were her children, grandchildren, and great-grandchildren. She absolutely had to be present for every school play, sporting event, birthday, birth, wedding, etc, if it was at all in her power! She was never too tired or too busy to play a game of Yahtzee, Quiddler, or Memory. She had a very active social life and network of friends.

Marge was a very independent woman and she knew what she knew. She wouldn’t hesitate to set you straight but still respected differing opinions. She had a truly mischievous smile that is ingrained in our memories. Anytime someone in the family caught a mess of fish she was always ready to fry them up wherever and whenever. If fish weren’t available, she was ready to feed any number of people with her delicious southern fried chicken.

Marge was a lifelong Roman Catholic and she knew where she was going to spend eternity from January 6, 2021 on. She wasn’t afraid of dying and she shared her confidence in her faith to all of us. She was truly an extraordinary person who in her 96 years on earth greatly influenced many, many people and we are all so much better off for having her in our lives.

Marge’s three children and their families are Fred (Smoke) and wife Judy who live in the Atlanta, GA area. They have a son, Dax, who lives in Los Angeles.

Our lives will never be the same without her. She loved well and was well loved. We look forward to being reunited with her one day.

In consideration of the ongoing pandemic, a celebration of Marge’s life will be held at a later date.

Online condolences may be made to the family at www.pasimplecremation.com.