To share your memory on the wall of Nora Lane, sign in using one of the following options:

She was born on December 23, 1929, in DuBois, PA, a daughter of the late Stanley Hoover and Ruth Dinger Hoover McNally.

Nora lovingly raised her own children and for more than 40 years provided home childcare for many other families. She was affectionately known as “Mamma Lane.” During their marriage, Nora and Bud spent their leisure time camping with family and friends including a 3-month trip to Alaska. She enjoyed cooking and especially baking pies and annually made hundreds of pie shells for the Park Forest United Methodist Women’s apple pie fundraiser.

According to the family’s wishes there will be no public services. The Lane family suggests that memorial contributions be made to: Grane Hospice Care Centre County, 115 Union Avenue, Altoona PA 16602.

To plant a memorial tree in honor of Nora Lane, please visit our Heartfelt Sympathies Store.

Receive notifications about information and event scheduling for Nora

There are no events scheduled. You can still show your support by sending flowers directly to the family, or planting a memorial tree in memory of Nora Lane.
Plant a Tree

We encourage you to share your most beloved memories of Nora here, so that the family and other loved ones can always see it. You can upload cherished photographs, or share your favorite stories, and can even comment on those shared by others. 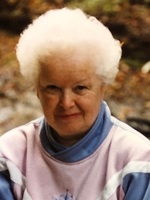