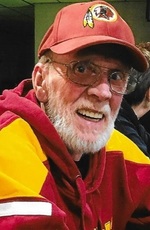 of Clearfield passed away peacefully on Monday, December 24, 2018.

Roger was born on July 23, 1946 in Clearfield, a son of the late George D. Duckett and Mary Zoe Aughenbaugh Duckett.

On May 20, 1978 he wed Patricia M. (Miller) Duckett in Sinnemahoning, PA. Pat resides in Clearfield.

In addition to his wife, he is survived by a twin brother, Ronald (Linda) of Statesville, NC; brothers, Gerald (Shelby) of Terra Alta, WV, George Jr. (Carol) of Grampian, Michael (Susan) of Curwensville, Scott (Kemberly) of Clearfield; a son, Cory (Kerri), granddaughter, Rae, and step-grandson, Everett, all of Clearfield.
Also surviving are sisters, Judy Graham of Hilton, NY, Linda (Ed) Milligan of Clearfield, Debbie (Gary) Hepburn of Clearfield and Kim (Todd) Swatsworth of Clearfield.
He had the respect and love of numerous nieces and nephews and a special sister-in-law, Sandra Serene of DuBois and her two daughters.

Roger was a lifetime member of the Vietnam Veterans of America and an active member of the John Lewis Shade American Legion Post#, Clearfield. He was also a current member of the Sinnemahoning Sportsmen Association and a past Governor of the Loyal Order of Moose Lodge #268, Curwensville.

He was an ironworker and helped construct the stack at the Shawville PA power plant.

Roger attended Clearfield High School and various other schools in Pittsburgh and Cherry Hill, NJ for diesel engines, transmissions and drive shafts. He was a truck mechanic for 44 years, employed at Clearfield Equipment, Zacherl Motors, St. Joseph Trucking and retiring from Rapid Ways Leasing in 2011.

His generosity, kindness, humor and love will be dearly missed.

There will be no public visitation or service.

A celebration of Roger's life will be arranged by his family at a later date.