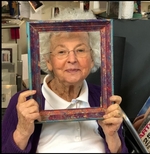 Ruth was the only child of Theresa (Terry), a sculptor, and Jacob (Jack) Aronow, an architectural engineer, of New York City, where she grew up and attended the High School Of Music & Art and Cooper Union. She also did graduate work at Yale University and Penn State and embarked on a career as a fabric designer before marrying Jerry and settling in Clearfield, PA to raise a family and teach and create art.

Ruth was a founding member of the Clearfield Arts Studio Theater (CAST.) After moving to State College, she was an active member and teacher at the Art Alliance and exhibitor at the Gallery Shop. She was a member of the Pennsylvania Watercolor Society.

Ruth traveled in Mexico, Canada, and the Southwest, and throughout Western Europe, often collaborating with her husband on photographic & watercolor projects. She exhibited in many local venues and won prizes frequently.

Ruth had an extraordinary talent for nurturing, from the exotic plants that bloomed under her green thumbs to the stray animals local children brought to her. She will be remembered for encouraging the talent of many fellow artists, young and old, and for collaborating with many who were also dear friends.

Donations in Ruth's name can be made to PAWS, source of her much-indulged cats Leo and Bernadette.

A celebration of life will be planned when gatherings are safe.